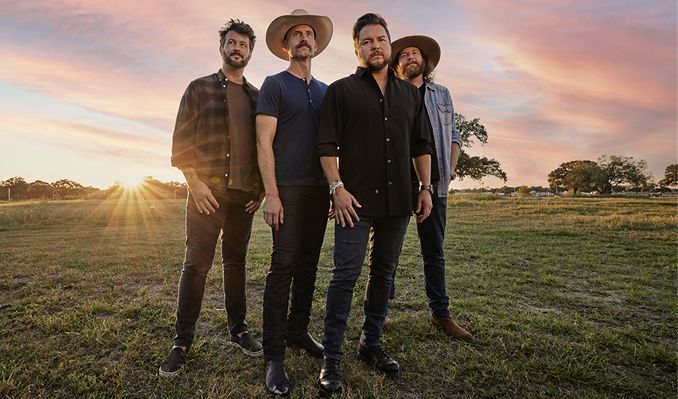 For all events, all attendees will be required to show evidence of their full vaccination against COVID-19 OR produce a negative COVID-19 test (PCR or antigen; no 'at home' tests) taken within 72 hours prior to attending the event.
"Full vaccination" means 14 days or more following the final dose of a US FDA approved or WHO recognized vaccine against COVID-19 (e.g., Moderna, Pfizer, Johnson & Johnson, AstraZeneca/SK Bioscience, Serum Institute of India/COVISHIELD and Vaxzevria, Sinopharm, and Sinovac). Acceptable vaccination documentation may be a physical copy of a COVID-19 Vaccination Record Card, a digital photo / copy of such card or such other proof as is permitted locally. For more information and FAQ's about this policy, visit aegpresents.com/health-policy

Eli Young Band kicked off summer with brand new music, marking their first single on The Valory music Co. and continuing their evolution with Big Machine Label Group. Their refreshing “Saltwater Gospel” is quickly making waves with airplay at County radio nationwide and across SiriusXM’s The Highway and No Shoes Radio ahead of the June 27 add date. With soul-cleansing lyrics and a catchy melodic flow, “Saltwater Gospel” is destined to follow the impressive trajectory of EYB’s previous PLATINUM and MULTI-PLATINUM chart-toppers: "Drunk Last Night,” “Even If It Breaks Your Heart” and “Crazy Girl.” Their last
album 10,000 TOWNS ranked #1 on the Billboard Top Country Albums chart, landed a coveted Top 5 spot on the Billboard 200 and claimed the top spot on the iTunes Country Albums chart. EYB’s hit singles have been awarded Billboard’s #1 Country Song of the Year and ACM Song of the Year, in addition to garnering EYB numerous nominations from GRAMMY, CMA, CMT, ACA and Teen Choice Awards. They have performed on NBC'S TODAY, Conan, Late Show With David Letterman, The Tonight Show With Jay Leno, Late Night With Jimmy Fallon, Jimmy Kimmel Live! and FOX & Friends. The talented foursome has toured with Toby Keith, Kenny Chesney, Rascal Flatts, Tim McGraw, Jason Aldean, Darius Rucker and Dave Matthews Band. They are currently debuting music for fans at festivals across the country and recording a new album with producers Ross Copperman and Jeremy Stover in Nashville. For tour dates and more, visit EliYoungBand.com.

Official WebsiteAmazonFacebook
*Service and handling fees are added to the price of each ticket.