Richmond, Virginia’s NATIONAL THEATER opened with much fanfare in 1923 and shortly became part of the thriving downtown theater scene. Touring vaudeville acts of the era performed on its stage and the screen was lit up with silent movies, accompanied by live music in the largest orchestra pit in the state. In its heyday, such local and national show-biz luminaries as Eddie Cantor and Orson Welles regularly looked over the footlights from the National’s stage.

An atmospheric theater, The National was designed by architect Claude K. Howell, who also created many Monument Avenue residences. Designed to be handsome and stately, the building is adorned with nymphs throughout and a frieze of them near the roof line installed by famed sculptor Ferruccio Legnaioli. Outside, the National resembles an Italian Renaissance villa while the interior is more restrained. The theater could originally seat 1,114 people.

When Historic Richmond Foundation carpenters cleaned the interior, they uncovered a sealed nursery. Along the walls are lively, painted stencils of children dressed as jesters holding a string from which puppets dangle. 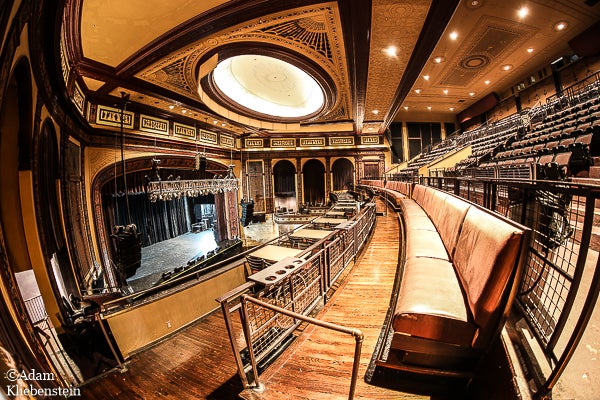 The National VIP Member Sponsorship entitles the holder to 2 admissions (free of course) to all shows at The National for one year from the date of purchase. We average over 180 shows per year at The National.

Access to a private VIP room, complete with couches and chairs, a full staffed bar, private restrooms, coat closet and a flat screen TV which broadcasts the live show.

Access to the exclusive VIP viewing area situated in the front of the National balcony. There are individual tables and chairs as well as banquettes with tables. The VIP balcony will be the best place to watch any show; as the balcony is only 50 feet from the stage. Artists will be playing directly to you.

Access to another adjacent VIP room, which will have several sofas and chairs. This room is the historic nanny room, which features original hand painted nursery murals. Additionally, this room will not have a sound system or bar, but instead, it will allow VIPs to retreat in this dedicated “quiet” room.

There is a separate VIP check-in for shows.

Admissions for VIP members can be given to clients, customers, friends, family, or traded with other VIPs so they may attend shows of their choice.